Hello again! I am back for Fall with…more Summer sewing action, lol. I haven’t even started Fall projects yet! (Soon, I hope!) To console you, I have 2 garments to share today. The first is by far the most satisfactory, so I’ll start there. **WARNING: Post contains awesome .gifs at the end!**

Presenting: a total copy-cat of something posted by Trend Patterns on Instagram! 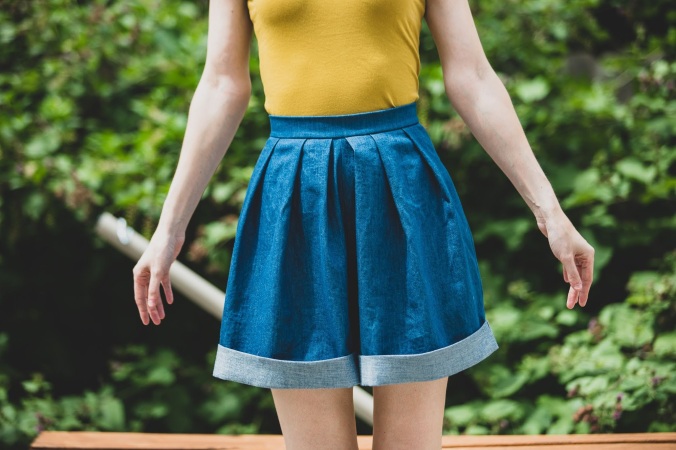 Bemberg rayon pockets, at that!

Trend Patterns posted photos from their new Spring/Summer 2018 collection on its release, and of course I ate that shit up! One outfit featured what looked like a shorts hack of their TPC6 trouser pattern, which I made last year and love. Lucy, the designer, kindly gave me details about how the shorts were made: 40cm was removed from the length of the pants, and the shorts were rolled up to create the cuffs. I knew I needed a pair exactly like them!

Original Inspiration! (Image is property of Trend Patterns and/or their credited photographer)

I bought some medium weight tencel denim from Cali Fabrics just for this project, and it was perfect. I wanted something that had some decent weight with a definite wrong side that would show on the cuffs, and this was IT! (Plus Cali has really great prices–they’re a new favorite place to shop for me.) I was a little worried it would be too soft and drapey for the pleats, but I think everything hangs nicely.

Apart from shortening the legs by 40cm, I didn’t make any pattern changes. I did do a little extra work for the cuffs, mostly because I can’t abide adjusting my clothes whilst wearing them and prefer things to be secure. Just rolling the shorts legs up every time I wore them wasn’t going to cut it! First, I hemmed the shorts legs–turning the hem to the right side–at 1/2″, and then turned and pressed a 2″ fold going the same direction. I knew I wanted a double-turn cuff, so I did another 2″ turn before tacking the cuffs to the shorts legs at the side seams and inseams. I was a little bit worried this would make them too short, but they’re exactly what I wanted! (Thank goodness for my short legs, LOL.)

I wore these shorts every week between finishing them and the end of the hot temperatures here–between the fabric and the design, they are an awesome addition to my summer wardrobe! It was also pretty exciting to get more mileage out of my beloved TPC6 pattern and create a whole new look from the same great base. Special thanks to Lucy at TP for sharing the details with me, too–having the exact measurement was the key to my success! ❤

Now for the less successful garment: the Jim dungaree skirt from Ready To Sew. Sorry in advance about how dark the skirt is photographing: I didn’t realize until I was adding them here! (Fair warning: these photos were all taken after the skirt had been worn for a gig but not laundered; it looks a little wrinkled and bagged out in some areas as a result!)

3 is plenty of buttons…

Back view (now with 100% more flank on display)

Straps down = shit just got real! 😉

I made this skirt for a gig we had back in July; we were playing at a fair, outdoors, and it was going to be HOT. I styled it just how I am wearing it here. (I didn’t make the crop top. Also, hooray for not having to wear a bra–my boobs and I felt very free and subversive. 😉 )

I am not 100% happy with this skirt…overalls…thing. That is partially my own fault (of which more later) but the pattern itself left me a bit annoyed in the actual process of making it. This was my first Ready To Sew pattern, too.

That said, I was happy wearing it and felt like it was a great choice for a gig. And I have to say I’ve gotten many compliments on it, which always makes me feel better about the things I’m not happy with.

So, on to my mini review of the pattern.

See? Not at all cool.

So in terms of things that weren’t down to my own mistakes, that’s it. Shall we talk about my idiocy now? 😀

Exhibit A: I picked this fabric.

It was a beast to cut out and I decided that matching the plaids was 1.) not in my best interest sanity-wise and 2.) not the best use of the limited time I had between the gig and when I started sewing. Instead, I decided to match plaids on the skirt horizontally as much as I could, and then focus the dungaree, waistband, and strap pieces on specific colors in the plaid pattern, mirroring those things as much as possible.

Exhibit B: I am spoiled by my usual pattern sizing. I didn’t take into account any finished measurements apart from the waist before I cut this out. This was a huge mistake! The hips were so tight I could barely move, and this fabric has a small lycra content, LOL. (My ass is flat anyway, but it was compressed to EXTRA flat in the original skirt.) And of course, by that point the skirt was fully constructed except for the hem. I damn-near trashed this thing, but decided to press on because I knew it would be an amazing gig wardrobe addition. All I could do was add panels to the side seams, but the complication was that the waist pieces fit fine–I didn’t want to make those any bigger. In the end, the sewing of the side panels is far from my best work; there are some mini-pleats at the waist to ease them into position without expanding the waist itself. 😦 (And you guys will NEVER see the inside of this skirt–it’s an ugly mess around those panels.) I hope it isn’t noticeable to non-sewers, but I have a hard time not noticing them.

I honestly thought this would be a better photo of the side view, but it’s really dark! =(

Exhibit C: Because I took such offense at the numerous waistband and dungaree front pieces, I lent no brain power to why there were separate left and right pieces for them. To explain: On a proper fly front, you need the shield piece to go behind your zipper; this also creates extra width across the front of your pants or skirt that must be accounted for in the length of your waistband treatment. Since I was using a longer zipper, I remembered to cut a longer fly shield that would reach up to the top of the waistband; I did NOT remember to cut a wider right front piece for the dungaree, and instead cut 2 mirrored lefts. Instead of recutting it (I got the mirroring done pretty nicely), I cut myself an extension and sewed it to my right dungaree front. Luckily I hadn’t cut my linings yet, so I used the correct piece for the lining on that side.

But it was a close call!!

Exhibit D: The straps. These weren’t hard to sew or anything, but I did make more work for myself. First of all, I chose to do an adjustable slider strap; this necessitated the creation of a short strap piece that would attach to each dungaree front. Then I decided to lengthen the back strap pieces, just to make sure they were long enough to be adjustable and compatible with the sliders. (They are actually too long and I have to tighten them regularly, but at least I like how they look! 🙂 ) Sewing them on proved to be slightly more complicated than the directions accounted for (which I don’t begrudge the pattern at all–this is on me!), so that was another headache to add. But overall I have no regrets about my choice of strap style: I think these look more professional, personally.

Exhibit E: The hem. I realized after cutting the skirt pieces out that it might be a bit brief, even for me! (I do a lot of bending and crouching during set-up and tear-down on stage, okay?) I assumed I would need a hem facing, and I did. I could only afford to sew it on at 1/8″ (which became more like 1/4″ after turn-of-cloth) and then decided to try machine blind-hemming this on a whim. LOLOLOLOL. It was bad. The feed of my machine distorted the facing against the skirt, so I had to rip and re-sew it by hand.

Check out those sliders!

Another quick note about sewing things with this longer zipper: I sewed the front waistbands to the skirt fronts prior to doing the fly, since the fly was going to run through them also. The lining fabric for those was already basted in place inside the seam allowance, and functioned more like an underlining. The dungaree top and lining were then attached–along with the straps–kind of using the method from the instructions. The back waistband was sewn to the back dungaree top, then lining pieces and straps were sewn as per the instructions; that entire apparatus was then attached to the skirt backs as instructed. So really, it wasn’t too different to the way the pattern says! Highly doable, if you’d like to make a similar alteration.

So that was an adventure, eh? 😀 Let’s all console ourselves with outtakes and .gifs!

Okay, not the most flattering shorts for sitting down…

Trying to hide my panties from the camera… 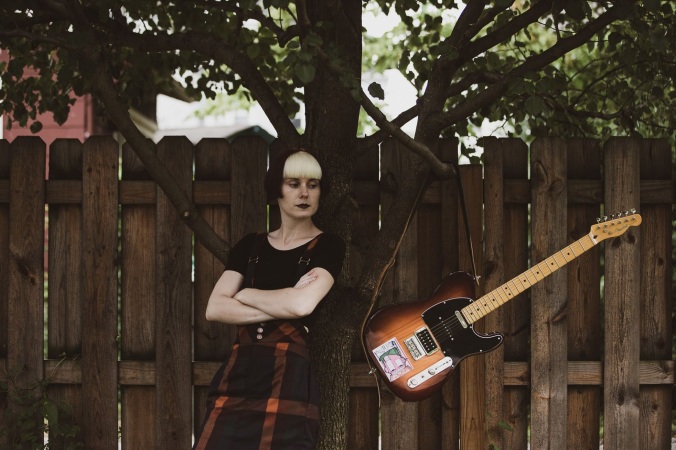 I should do bachelor parties, amirite? xD

That’s all for me today, but hopefully I’ll be back soon with something to share!

This site uses Akismet to reduce spam. Learn how your comment data is processed.