Hiiiiiiii! Wanna guess what I’ve been up to since I last wrote? 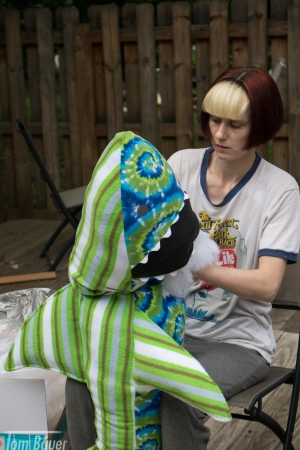 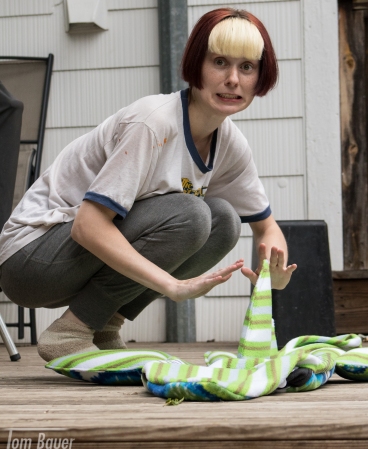 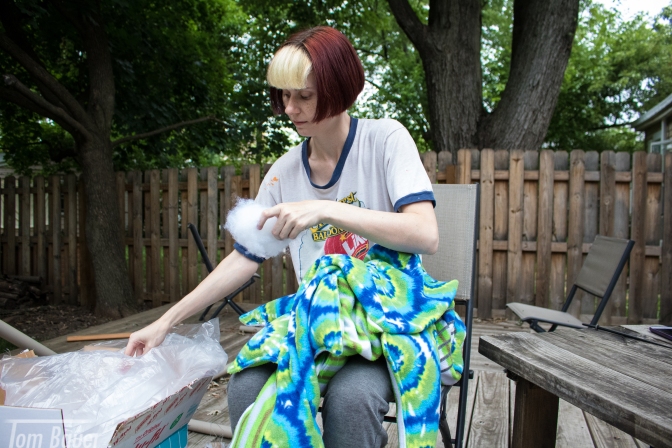 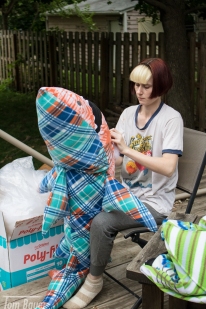 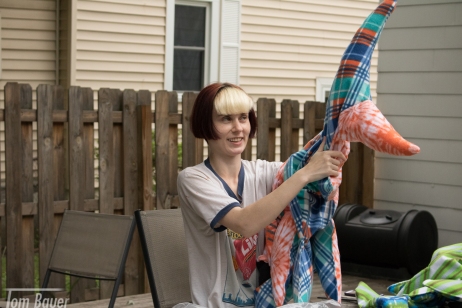 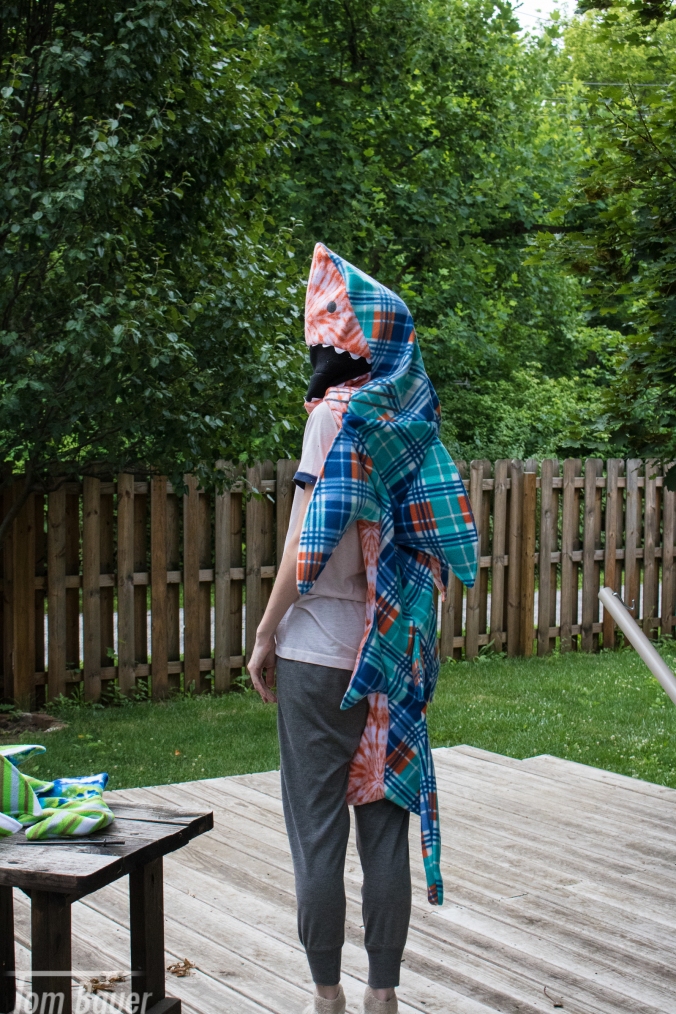 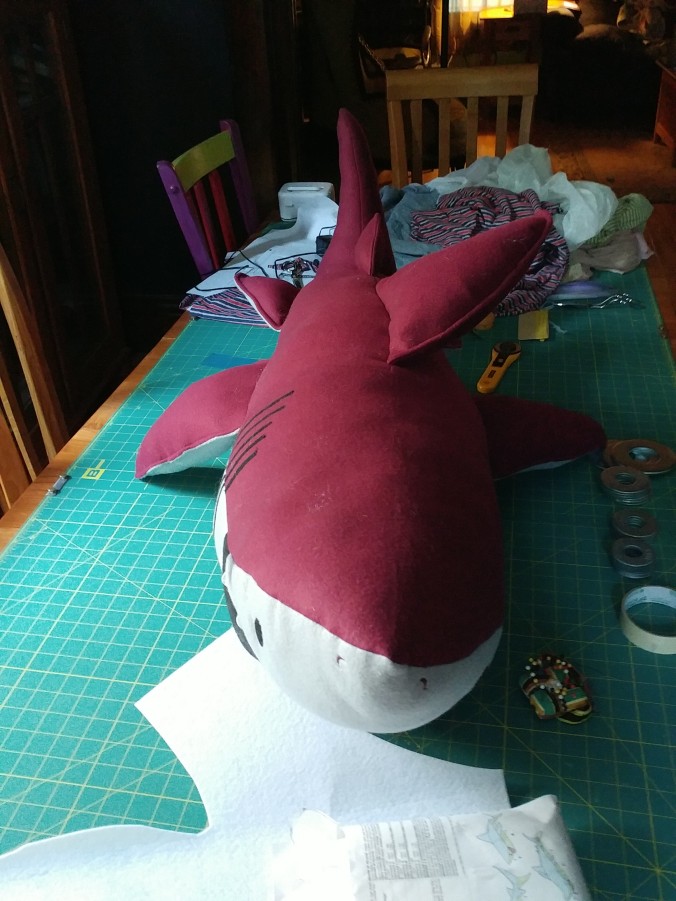 Yep–sharks like whoa. The last one there is for my little sister, who started teaching at a new school this year. Their mascot? THE SHARKS. For real. So obviously I made her one in the school’s colors. I did as she asked and made this one a little smaller–it’s about 75% of the original size. It’s still over 4′ long though!

It’s August, which means that it’s time for many of us to begin thinking about our plans for the upcoming season(s). So with that in mind, I thought I’d do a planning post to share my ideal sewing focal points as we Ohioans prep for Fall (and football season, UGH) and Winter.

I always love reading other people’s planning posts, so I thought it would be fun to jump on the bandwagon. It’s also nice to have a concrete reminder of my intentions! My plans* are mostly based on wardrobe needs, but never fear: I have some ridiculous shit in there, too! And of course, I have listed wayyyyyy more patterns than I could possibly sew up before January, but I like to give myself plenty of options. 🙂

*We at The ‘Mads’ House reserve the right to arbitrarily change these plans for any or no reason. We are fickle people.*

I need tops. Any tops. Knit tops, woven shirts, long-sleeved, short-sleeved, you name it. I have begun work on one already, so hopefully I will be sharing some results sooner rather than later! My pattern selections–below, in no particular order–for this section are quite numerous: 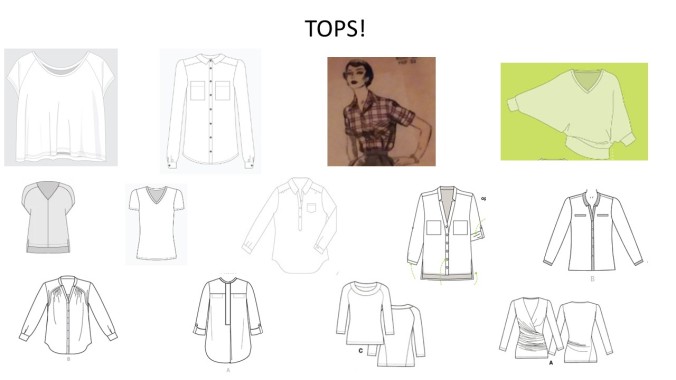 Namely, jeans. There is something demoralizing about one’s spouse having a pair of handmade jeans whilst you are left out, trust me. I have plenty of denim, from neon to black to indigo to non-stretch (for real–it’s everywhere) and just need to get started. Skinny jeans are my staple, but I’d like to take a crack at a pair of boyfriend jeans before the year is over. I also want to make a few pairs of pleated, cropped trousers like all the pairs Keira Knightley wears in “Begin Again.” Pattern selections: 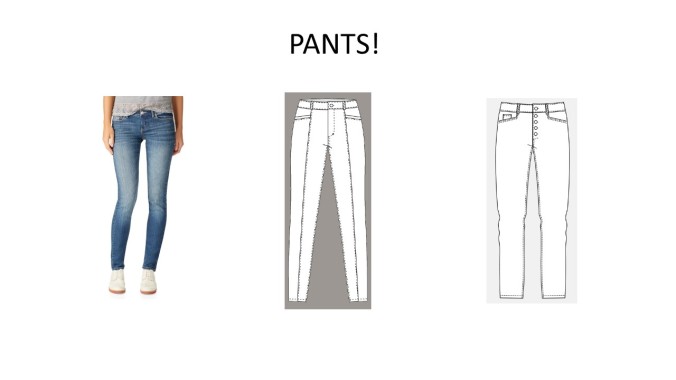 Specifically, mini-skirts. They’ll work in summer, obviously, but they are also great with tights and layers up top for Fall. I have twill, I have denim, I’m ready!! Patterns: 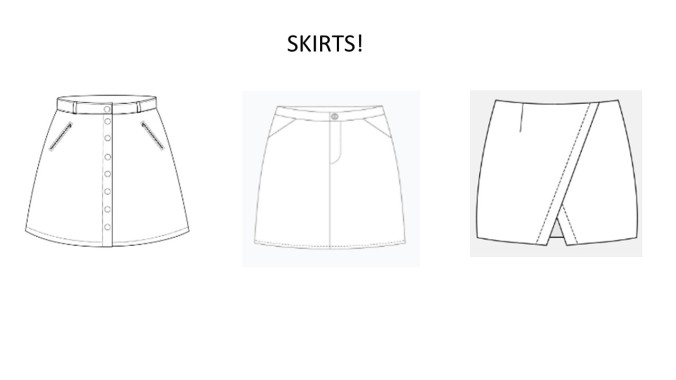 After giving away almost all my summer dresses last year, I have been struggling to get dressed for work all season. I’d like to get a head start for next year, as well as give myself lots of options for Fall layering. 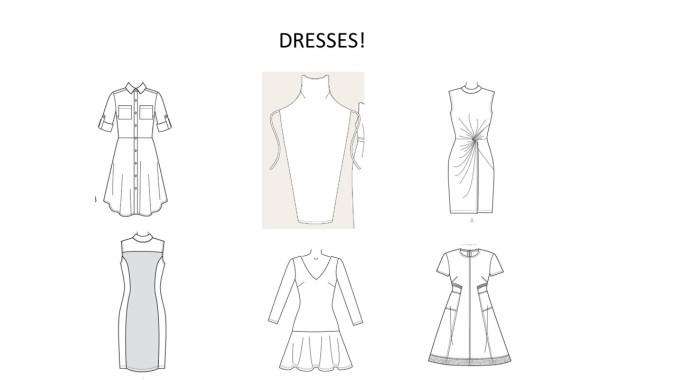 These are all things I need, but that don’t fit neatly into one of the above categories! 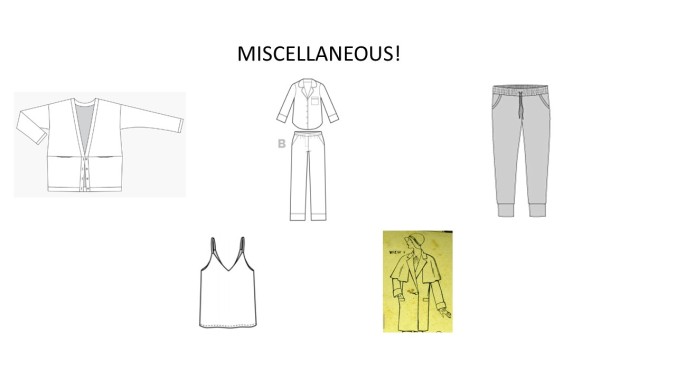 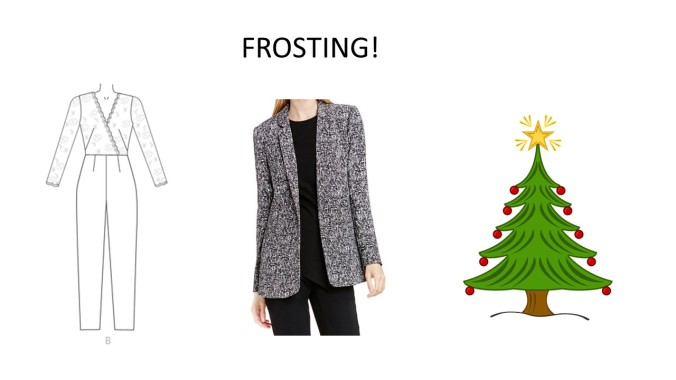 So that’s my ridiculous list for Fall/Winter 2016! Hopefully I get at least one thing done from each category, LOL.

As promised (or threatened–however you want to look at it!), here I am with Part 2 of my holiday sewing binge. This one is a riot!

For my birthday last year, Tom got me nice gifts. (But don’t ask me what they were–I cannot remember!) And because he is a total dear, he remembered me going crazy over a stuffed shark sewing pattern that had been released by McCall’s right before my birthday: M7103. He bought me the pattern! And then I let it sit for over a year without using it, because that’s how I roll. But I always knew that I’d come back to it someday.

“Someday” turned out to be Christmas 2015, when I decided to follow through on a vague threat I’d made to my friends with a baby–to sew a giant stuffed shark for their 1-year-old baby. I am sure they thought I was kidding, but I would never joke about something this awesome. I decided to sew View A, the Great White, because it is the biggest shark of the 3 and therefore the best. (Have I mentioned that “JAWS” is one of my very favorite movies? It is.) I bought fleece, giant rick-rack, one square of felt, and some craft-weight interfacing–all of which was a first for me–and got down to it. Within one Saturday (plus cutting out the night before), the shark was complete. He needed about 3-4 pounds of Poly-Fil fluff.

The pattern was actually pretty easy to put together, despite my lack of craft sewing experience. The pattern suggests shank buttons for the eyes, but since this was for a really little kid, I felt that was a choking hazard waiting to happen. I used some of my felt instead, and am really happy with how the eyes look. I just put my big washers on top of the felt, traced the center hole with chalk, and ta-da! Instant shark eyes that are perfectly round and the exact same size. The pattern also recommended decorative stitches–of which I am generally Not A Fan–for the gills and for topstitching around the fins. I used more felt for the gills, and those turned out beautifully, if I do say so myself. The fins just got topstitched with a regular straight stitch. If anyone out there wants to make this pattern, be sure to grade your seams, especially where you’ve got craft interfacing; the pattern says nothing about that, and I think that’s an oversight. That stuff will get bulky REAL quick. I did my best to cut the interfacing out of seam allowances and then graded everything else with pinking shears.

Would you all like to meet the shark (aka Sherk, which is what we called him)? 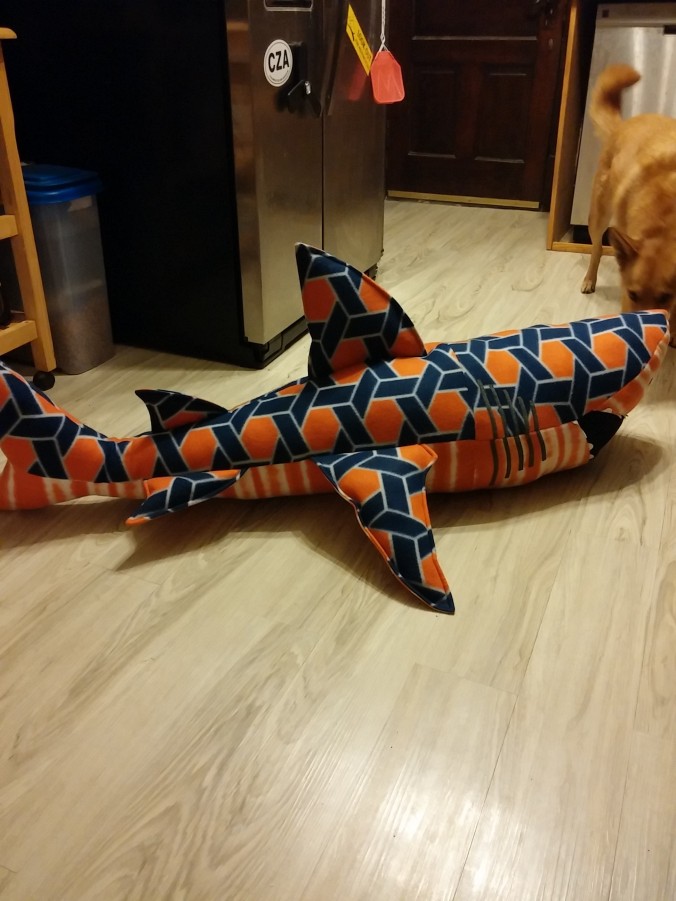 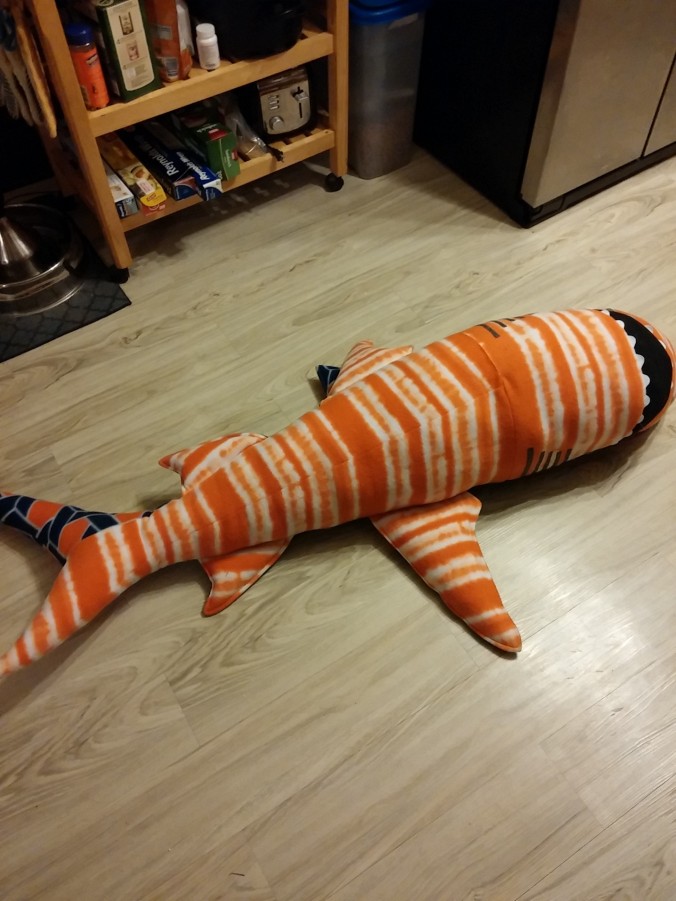 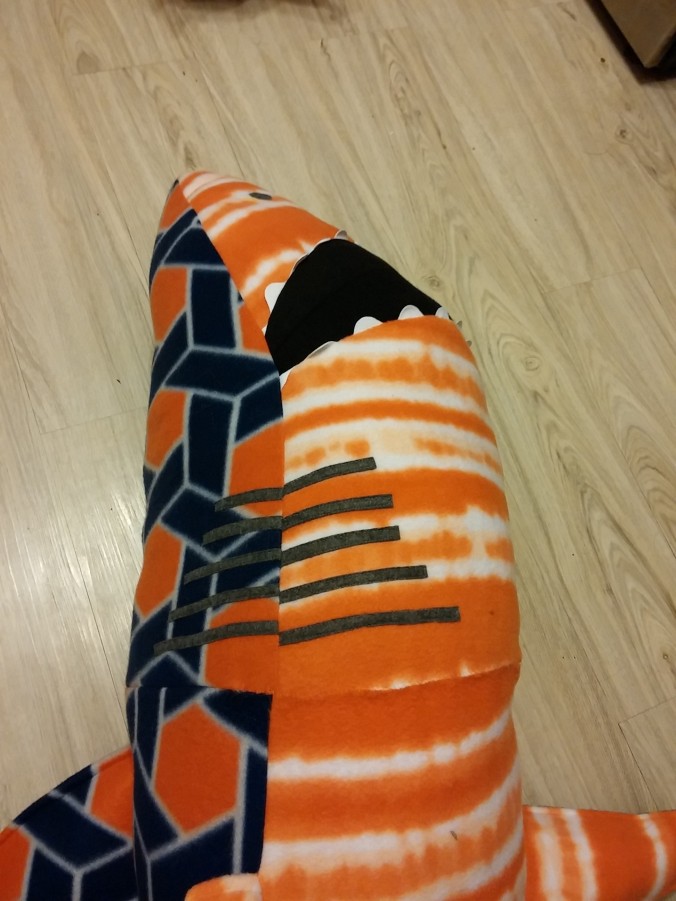 Now, when I asked for this pattern last year, I didn’t do so intending to be selfless with it: I wanted a stuffed shark. I thought it would be fun to have around in a weird, whimsical-stuffed-toy, refusing-to-grow-up sort of way; I thought maybe we could mount it on the wall like a real fish or something. After I finished this gift shark, I realized how bummed I was that I still didn’t have one of my own. So to commemorate our brief time together, Tom took a series of photos of me and Sherk goofing off: 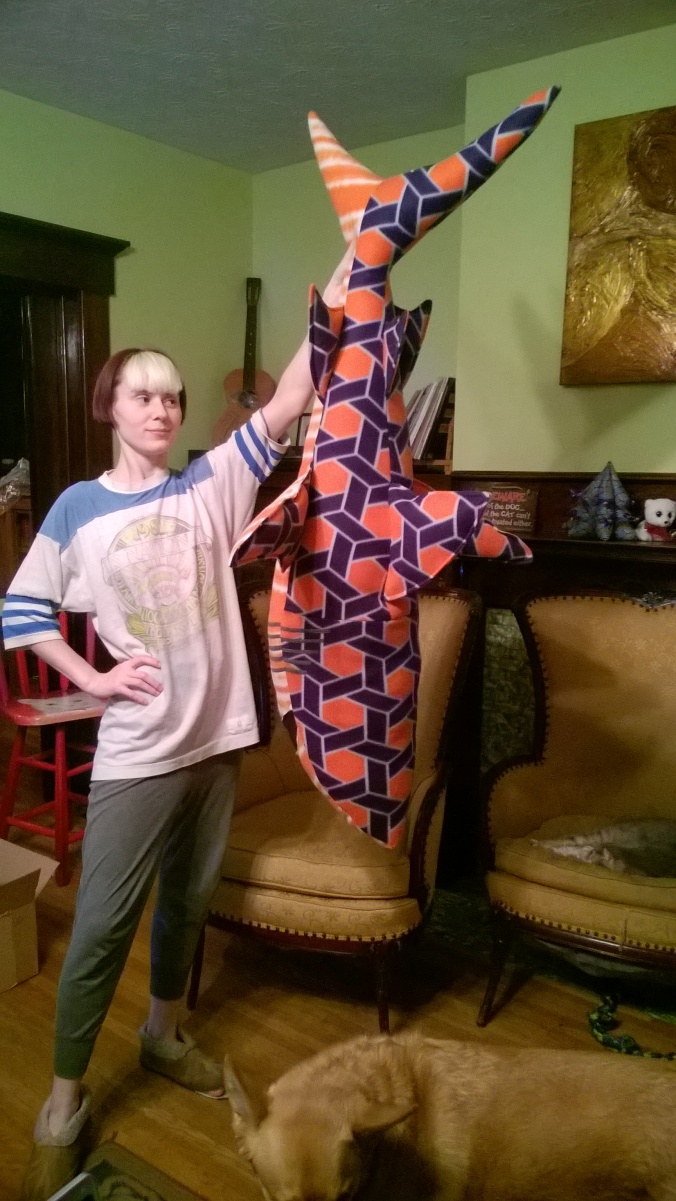 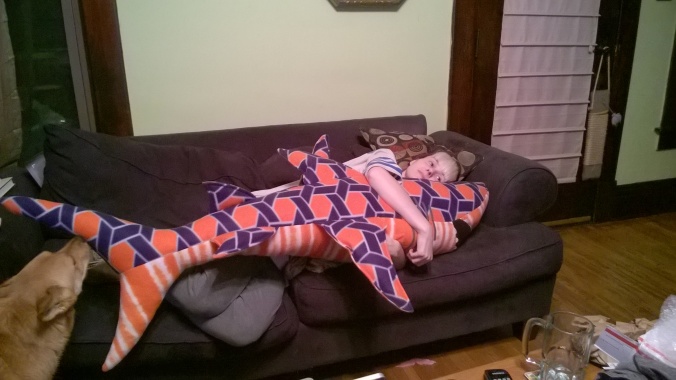 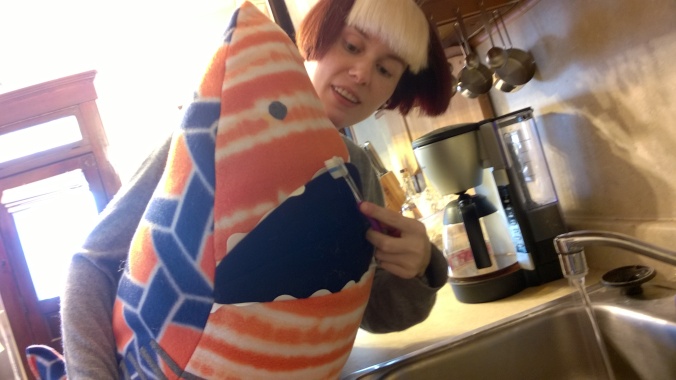 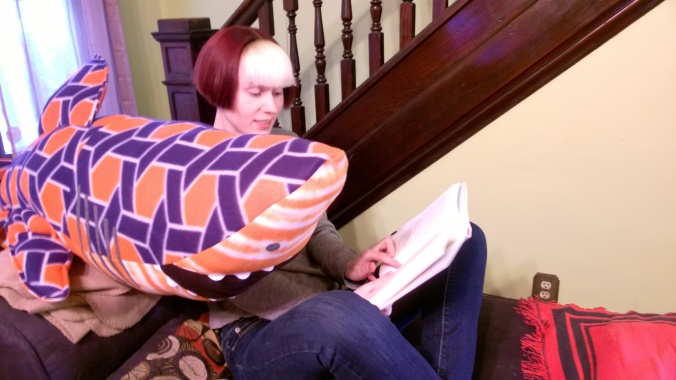 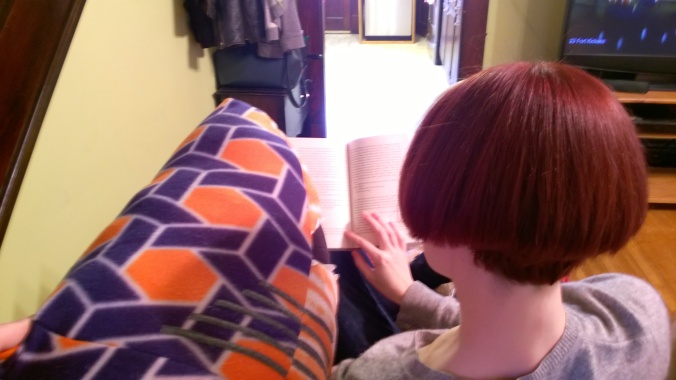 So young, and already reading at a 12th grade level! 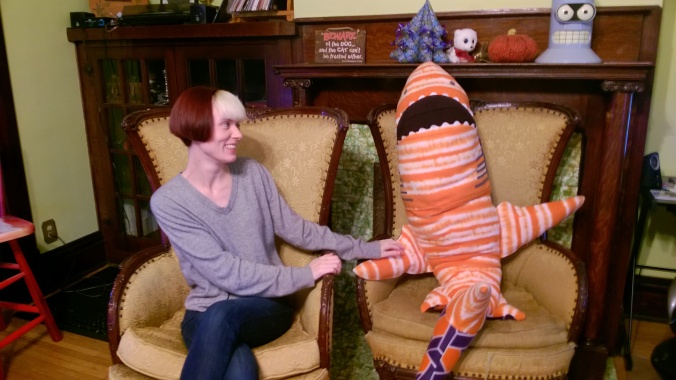 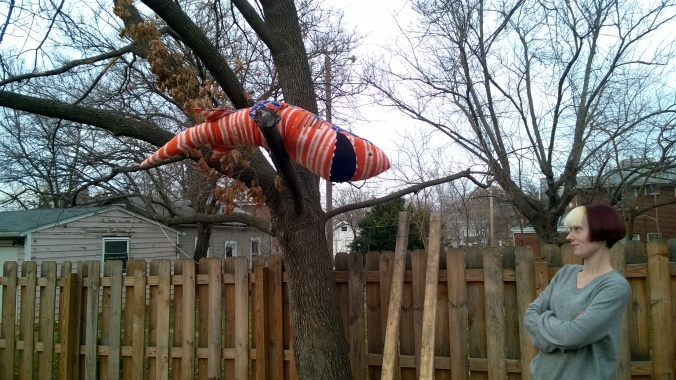 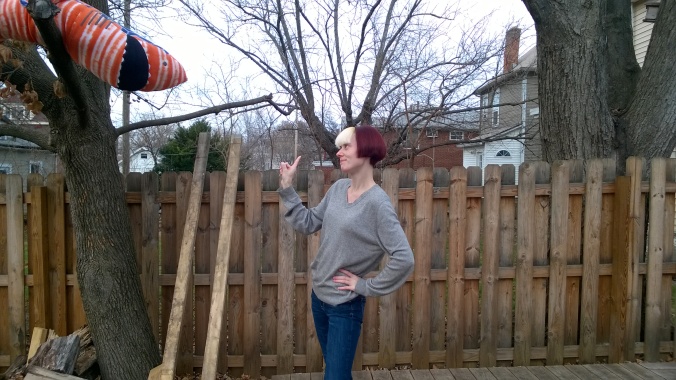 Obviously these are very tongue-in-cheek–we thought they would be funny. And they were! We also had fun driving the shark to his new home: he rode shotgun, with his seat belt on, and we turned the front dome lights on so people driving by could see him!  And then we said goodbye to our shark buddy: 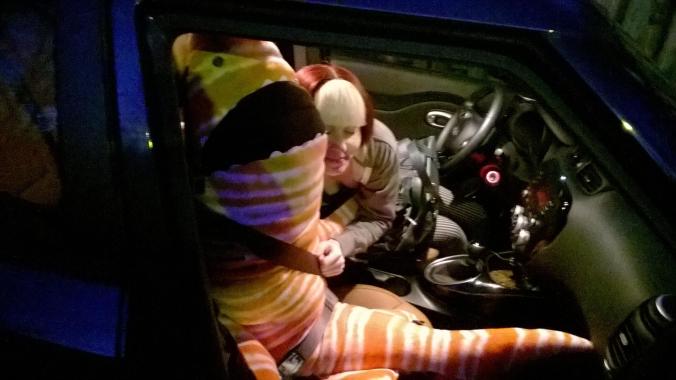 His new human is 14 months old and took some time to warm up to this big thing that some weird lady brought to his house. But once we left, I got a photo from his parents of him going in for a full-body shark hug, so I think this was a success! Bonus: one of the family cats has also taken a shine to him! His family has christened him “Dunuh,” after the well-known sound humans make to mimic the iconic “JAWS” score, obviously; we love the name they chose for him, and I am so glad he is enjoyed. All kidding aside, that was the entire point: he’s a great, giant, fluffy cuddle-buddy for a sweet little child (and a cat). And just in case–because I may not be a parent, but I know enough to have been concerned that a giant 5-foot shark may not be most parents’ idea of a wonderful gift for their kid when it comes to finding somewhere to put it–I also brought a carrot cake for kiddo’s parents to get back in their good graces. All that remains now is to make one for us to keep!!

Thus ends my selfless holiday sewing round-up for 2015. I did make all the Sewaholic Stanley Trees I intended to make, but never got photos of them before they were gifted. Oops! But that is a great little craft pattern, too: I love my tree, and (thank goodness!) my family members really enjoyed theirs, too. The hand sewing parts take a while, but once you get into the rhythm of it, it’s not bad.

Did you do any gift or holiday-related sewing this year?