Hellooooooooooo! Is anyone still out there? 🙂

After a serious lack of sewing mojo (and opportunity), I finally started sewing for Fall/Winter in November.

I also managed to sneak in a very minor costume project back in October, which I will also show you today.

I have missed blogging so much! (And sewing, for that matter.) This was a weird year: in February we found out that Tom would be without a job come November, which was highly stressful to say the least. (This was not helped by the extra-long timeline and a severance worth waiting for at the end of it.) Seriously folks, my hair started thinning and graying during that time because of how stressed out I was about it. I didn’t mention it here because I had no way of knowing how it would work out, and it didn’t seem appropriate to air it and have it hanging over not just my IRL life, but my blog and sewing life as well. 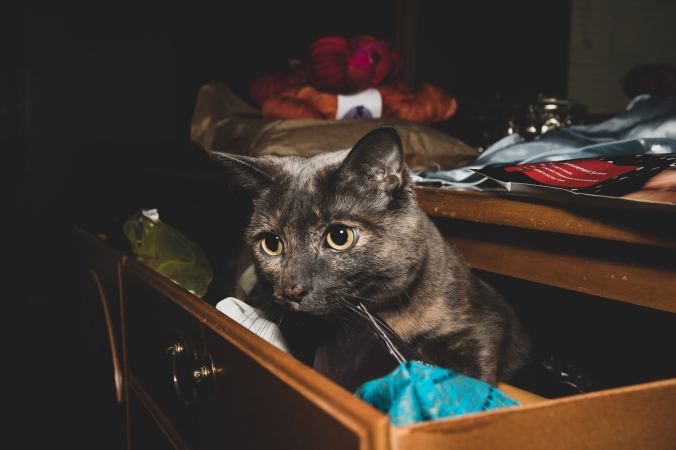 Happily, I can report that Tom not only found a better job before his end date, but that he still managed to get his severance out of the old place. Yay!!!! But between that whole thing and undertaking several remodeling projects in the Fall–smoke ’em if you got ’em, amirite?–I spent most of the year stressed out, fluttering between self-distracting productivity and creative paralysis (the kind with TONS of ideas but not the will to execute them). 😦 The real death blow for my sewing came in July/August when we had an appraisal done on the house and I had to tear down my sewing space. This was immediately followed by having our upstairs floors refinished, so all my sewing stuff in the attic got buried by a floor’s worth of furniture and clutter that we still haven’t fully put back to rights. And at that point, Tom did not have the new job lined up yet. Say it with me: UGHHHHHH. (Double UGHHHHHH for clinical depression and anxiety on top of all of this, which made everything that much worse.) I still haven’t got my supplies sorted out, but I’ve been able to sew a few things and am slowly relaxing and getting inspired again after being totally wound up for months on end.

So that’s been my last few months. But now we can get back to THE SEWING!!!

First up: a Talvikki sweater! 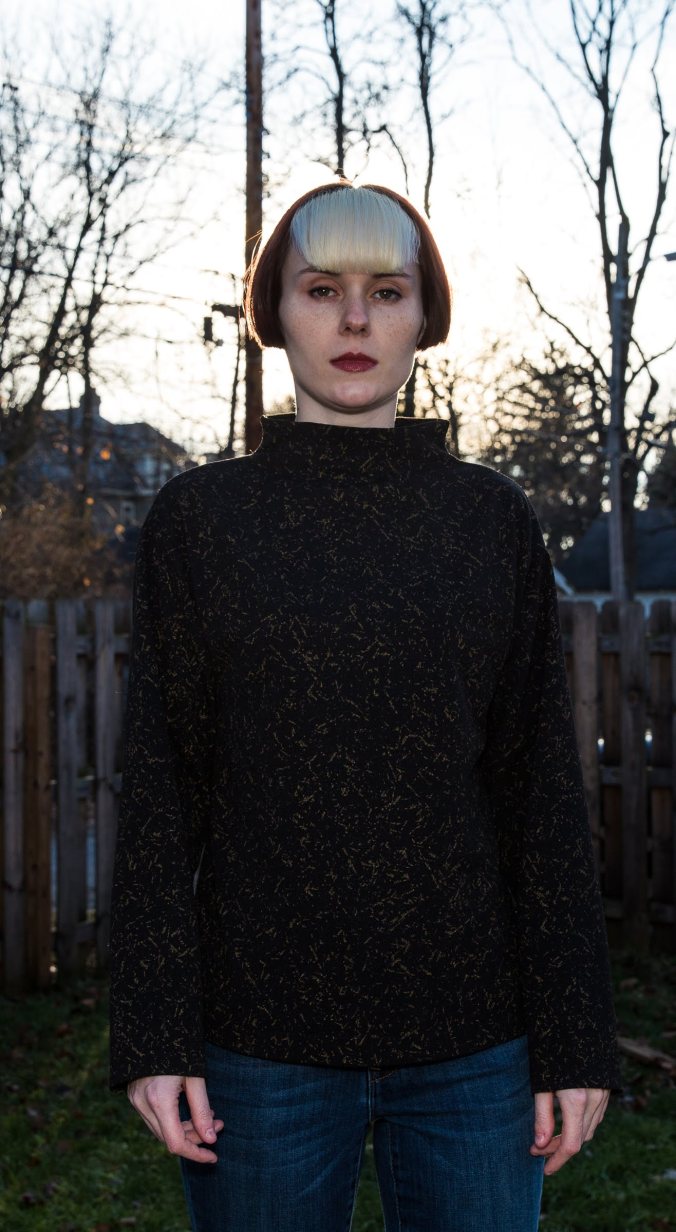 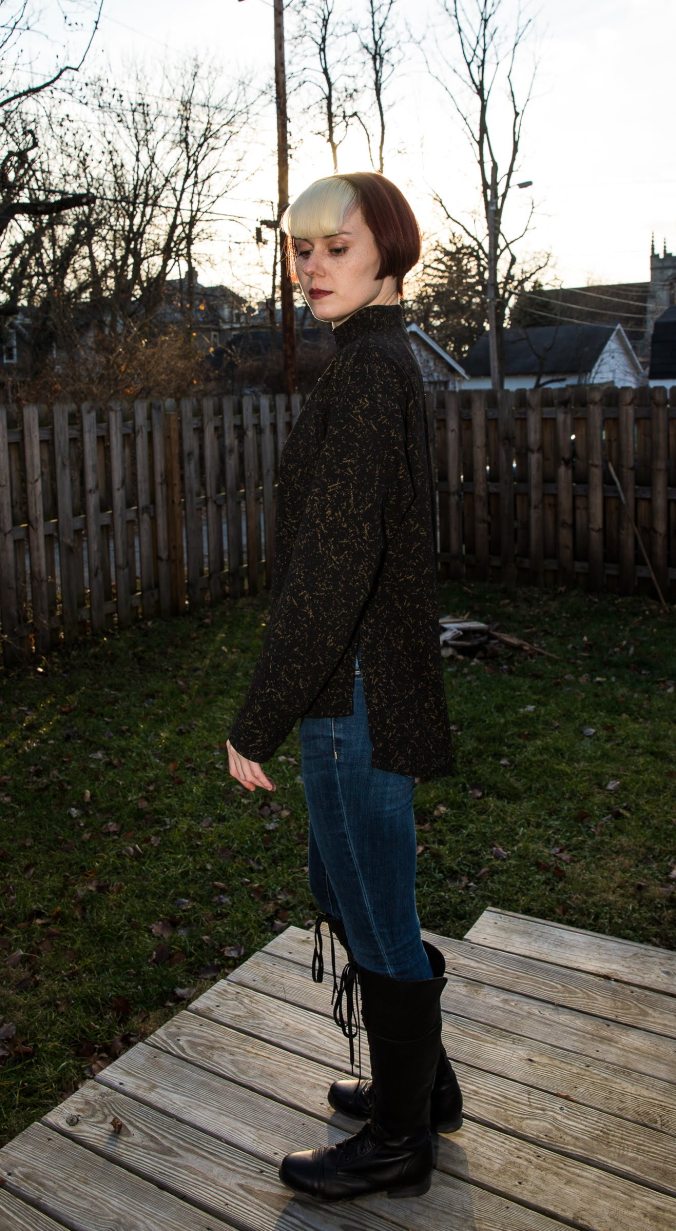 The important view of this pattern 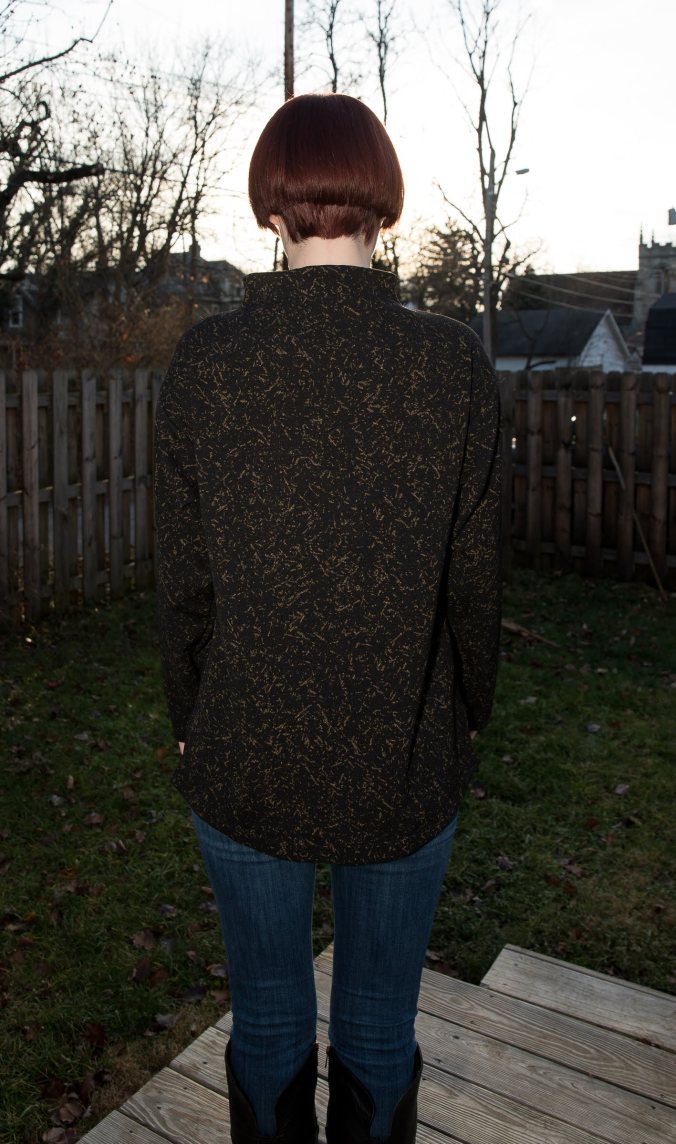 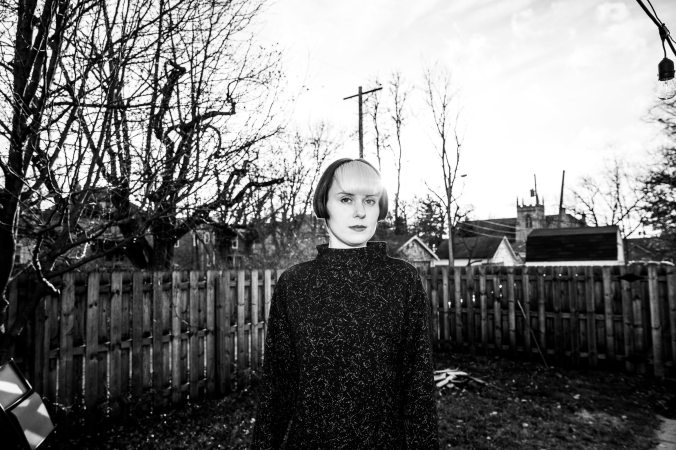 This was a much-needed “win” project after months of limited sewing time and scarce inspiration. I love the fabric/pattern combo, and think it will be great dressed up or down through Winter!

The fabric is a scuba from Marcy Tilton, and I love it. I hardly ever shop there (it’s an issue of the selection not being totally up my alley and the prices, both for fabric AND shipping) but I’m glad I treated myself to this piece. Initially I thought I’d make a skirt but I have to acknowledge that knit skirts just aren’t my jam. I had *just* enough yardage to get this top cut out–and I mean just. It was worth the tetris.

And now for something unlike anything I usually trouble you with around here: a costume piece! 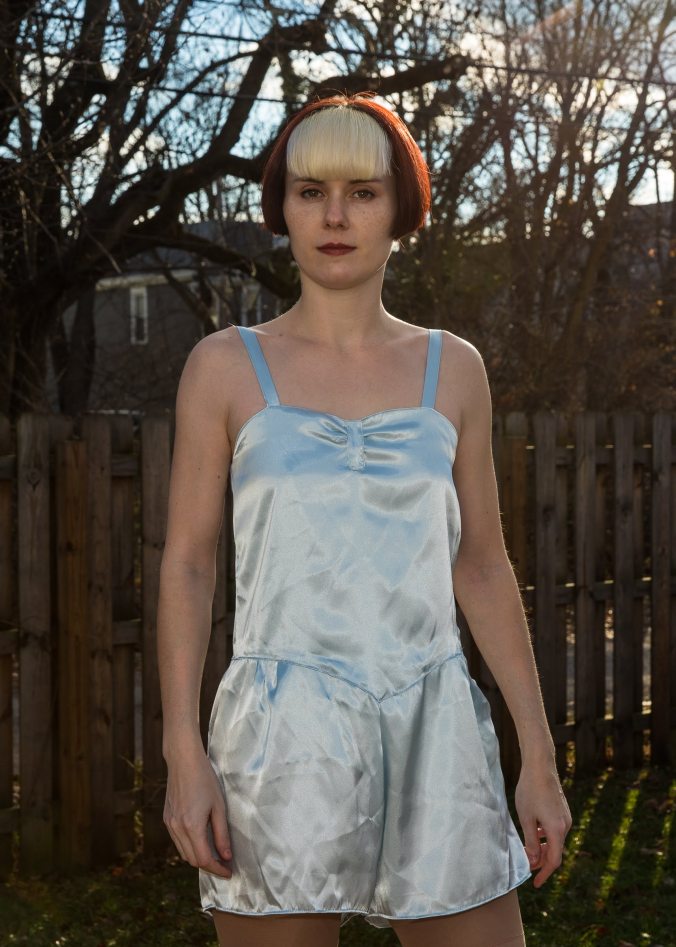 Yes, I took outdoor photos of this thing *in December* for you all. You’re welcome.

The back is the best bit, of course.

This is underwear. 1920s-30s underwear, to be exact. (And yes, those are vintage shoes ca. 1930s also–I love them.) The pattern is Depew Patterns #2029 and I very highly recommend it. I didn’t really follow the directions for sewing it but everything went together beautifully. Really, it’s a relatively easy project if you fancy some old-fashioned (and complicated-in-the-bathroom, since it doesn’t have a snap crotch) undergarments!

You might be wondering why I’d go to the trouble of making costume underwear, especially since I own extant undergarments from this exact time period (that DO have snap crotches). Well…I had an event!

I mentioned it in my Top 5 post for last year, but this event is called “Tales from the Crypt.” It’s held at Green Lawn Abbey and this year, I was honored to be asked to help with the event as an actor once again. (And not as an understudy, yay!) Since the researcher who did most of the work on my “character” and I had more time to talk about a staging setup, we had quite a developed idea going into the event. (Which was definitely mostly his idea!) He was going for a boudoir-like setting: a vanity table, mirror and brush set, and me in a dressing gown surrounded by playbills. (My “character” was a Ziegfeld Follies girl!) I was game, but didn’t want to wear my extant undergarments because they’re ivory and slightly sheer. My skin is also ivory and slightly sheer–not a good mix. 😉 And while awe-inspiring, the setting–a mausoleum ca. 1927 whose interior is white marble, at night, lit mainly by candlelight and gas lamps–didn’t really lend itself to my pasty skin in pasty lingerie standing out against the white background. So I decided to make something! 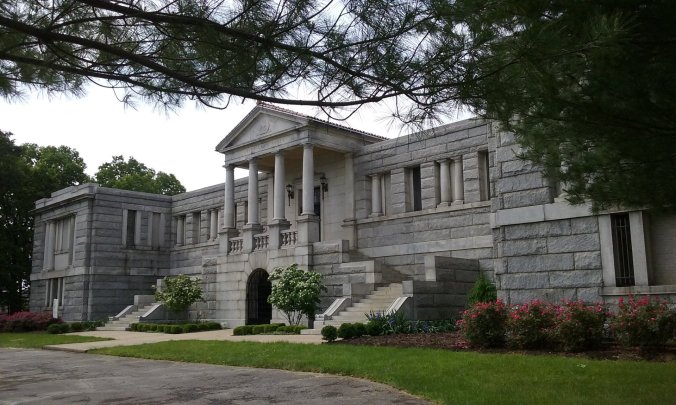 The teddy fabric is polyester charmeuse but the color is good for the era, and making it myself allowed me to line the entire bodice for added opacity. (No bra was going to work with that back!) I was also planning to make a kimono-inspired robe from Depew Patterns #3039 (also from 1927–how freaky is that?!?) but I picked a brocade that ended up being way too heavy for the shape of the design. I got it most of the way made and tried it on, and thought it looked like an appropriative wizard’s robe. (The fabric had a general Asian motif, since that was very popular in the 1910s and 1920s.)

So I scrapped that and decided I would wear my own extant vintage robe, which is a striking lapis blue color dating to the 1940s. The style is very much kimono-inspired, and could pass for something earlier. 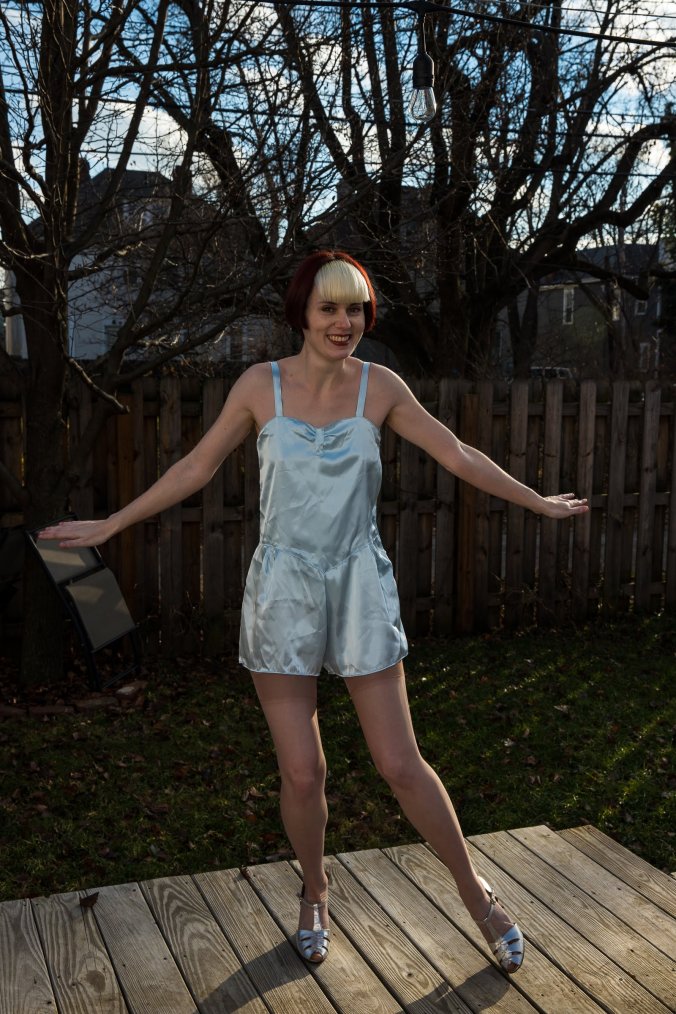 As close the The Charleston as I’m going to get…

And then on the day, the weather was COLD. Like, mid-40s and raining. And this building isn’t heated. The event lasts for multiple hours, and consists of 4 separate monologues for each actor on opening night. So in an effort to protect my health* I opted for a true vintage dress in the end. But I did wear my teddy underneath it! I was very nervous, and wearing something I made always makes me feel more confident in any situation. 😀

*Yeah yeah, I know that the temperature doesn’t make people sick. However, exposure can lower your body’s ability to fend off invading pathogens; since my lungs are vulnerable to infections already, this was not a risk I was willing to take.

Here are some photos from the event, courtesy of my husband Tom, who was “voluntold” to take photos of the 2nd show that weekend. 😉 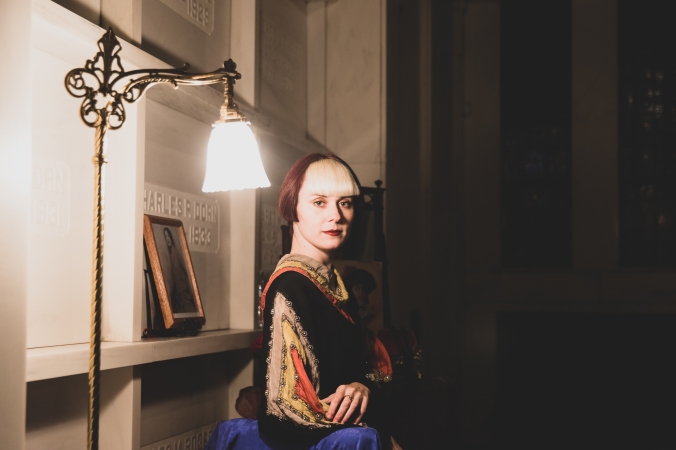 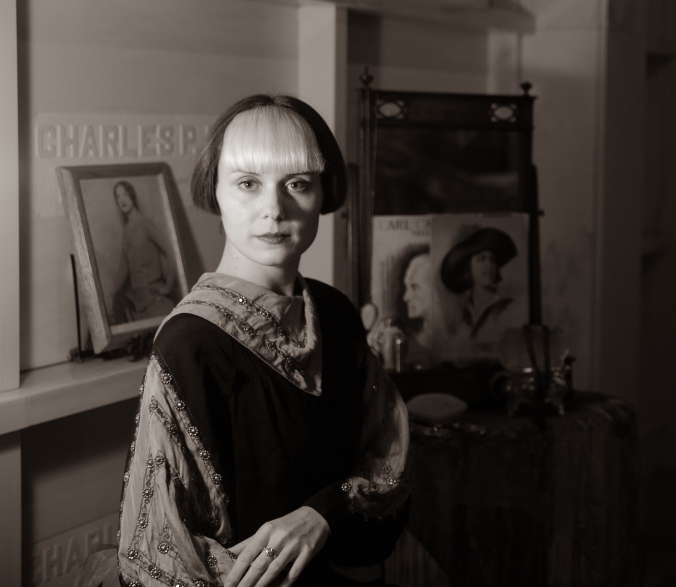 You can see Sylvia, my “character,” in the background photo 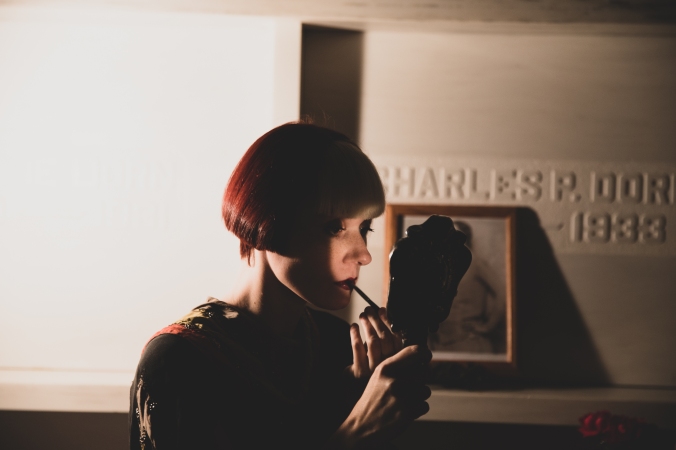 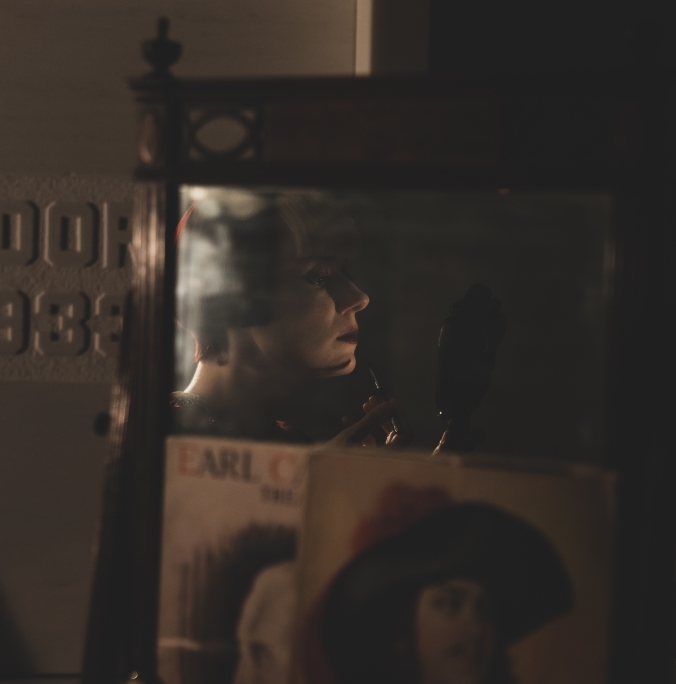 Playbills for actual productions Sylvia was in! 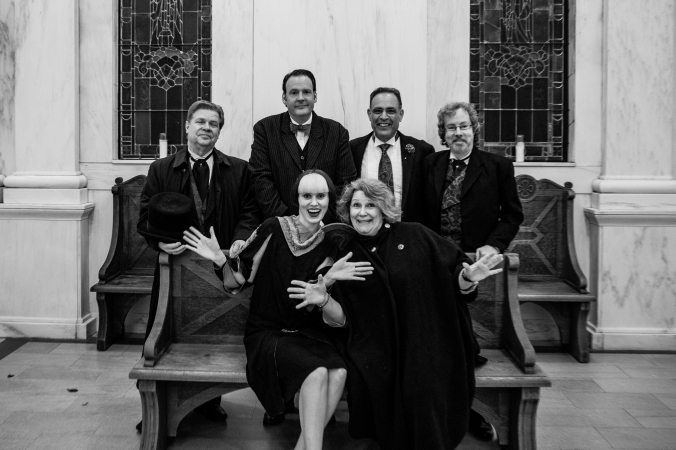 Our intrepid cast this year!

So that’s a lot of words about non-sewing stuff, far fewer about a cool sweater, and probably too many about a silly costume piece made out of polyester. 😉 I’m looking forward to sharing my (likely) final project for 2018 shortly, as well as doing my Top 5 posts for this year. I’ve been pretty absent from this blog lately, and I’ve had a hard time keeping up with my friends, both in real-life and online. Here’s hoping 2019 is a more active year in all those respects!

Thanks for reading, and I’ll see you again soon!